Travel through Time at the Henry B. Plant Museum in Tampa, Florida

Henry Bradley Plant had a vision: He wanted to create an expansive transport system in Florida, connecting Tampa to the rest of the eastern seaboard. In the late 1800s, he invested heavily in railroads and steamship lines in the state. This spiderweb of routes would become known as The Plant System, and is credited with kickstarting Florida’s now flourishing tourism industry.

However, before a single track was placed, the state was an untamed wilderness. Tampa, an area at the heart of Plant’s ambitious construction project, was little more than a collection of inhospitable sand swamps. His challenge? Turn this slice of America into both a navigable and appealing travel destination. 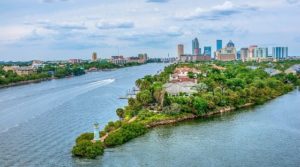 The Tampa Bay Hotel was his jewel in the wilderness, an architectural feat that stands tall and proud as a testament to the transport tycoon’s ambitious vision. With Moorish inspiration, a style of architecture that borrows heavily from old world Islamic construction techniques, and furnished with an abundance of opulent furniture, the hotel quickly became a sought after destination for travelers across the country.

It was a lively venue that played host to tea parties, balls, and organized hunts. Guests could make use of rickshaws at any time to tour the property and surrounds. The hotel also had its own golf course, shuffleboard and tennis courts, and even a racetrack. On one side of the hotel, from a sweeping veranda, guests could look down into the hotel’s sprawling gardens while feasting on eight-course dinners and sipping fine wines. Former president Theodore Roosevelt was among the many famous patrons who retained a suite at the popular hotel.

Now, the hotel is home to the Henry B. Plant Museum and the University of Tampa. It is also a National Historic Landmark. A visit to the museum will transport you to another era through a series of exhibits and innovative programs geared towards evoking the spirit of these long-gone times. The building still features original artifacts and furnishings, and guided audio tours will help immerse you in the opulence of hotel’s rich and impactful history.

Situated just outside of the museum, you’ll find the Henry B. Plant Park, Tampa’s oldest and most expansive public botanical gardens. These tranquil surrounds are the perfect place to enjoy an afternoon picnic, celebrate a special occasion, or sit back, relax, and soak up the scenery.

Open from 10am to 8pm. To find out more about the museum, gardens, and hotel’s history, click HERE.